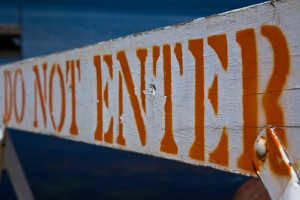 Think about this: Knowing how to run assumes you’re already walking.  In terms of success in life, many people think they’re running when in fact they’re barely walking; some aren’t even standing yet.

So how do you turn your passion into purpose; your desire into decision; your excitement into execution?  Action Over Apprehension…  More than just a tag line, this is about the art of eating an elephant, one bite at a time.  Action is fear’s antidote.  It kills it, fast.  But there is a continuum that exists between preparation, perfection, and procrastination that’s important to recognize:

Preparation = the pre-polishing = the required foundation.

Perfection = the polishing = the necessary distinction.

Procrastination = the re-polishing = the debilitating destruction.

It’s important to objectively observe where you are at with any given project, assignment, or task at hand.  Don’t kid yourself.  Where are you really?  Are you researching and creating in the preparation stage; building the foundation?  Are you refining for excellence in the perfection stage; separating yourself out from the competition?  Or are you rehashing the preparation and controlling the perfection stages thus procrastinating your progress?  Your truthful assessment here will influence and affect your outcome.

“If everything seems under control you’re not going fast enough.”  ~ Mario Andretti

Sometimes things happen gradually, but they do happen provided you do something first.  For example, I didn’t exactly set out to write my first book, The Musician’s Corner®…  I started by writing a weekly column of about 500 words each for a local newspaper.  In my mind, that was doable, but not an entire book…are you kidding me?  The same thing happened when one 60-second radio spot per week eventually turned into an entire audio CD program that I engineered, produced, and published.  This wasn’t exactly on the radar at first either.  I often think of the cold water in the swimming pool analogy… do you jump in, wade in, or opt out altogether?  You have to make the decision to turn negative debilitating energy into positive, dynamic energy.  You have to be “soldiers under command”… going into the fray, yet afraid.

Everyone gets scared and apprehensive at times, it’s normal.  But when you’re scared, uncertain, or not confident… those are the times that action is an absolute must.  Get up and DO something, anything.  “failing forward” is better than “stagnating still.”  Turn and run straight into the unknown by facing your fears.  By simply taking small action steps each day, you are systematically disassembling and deactivating the fear that is attempting to paralyze you in the first place.  This action builds on itself geometrically – eventually fueling you on to greater achievements and accomplishments than you ever thought possible.  If you have the courage to begin, you’ll have the courage to succeed.

“Some people take no mental exercise apart from jumping to conclusions.”  ~ Harold Acton

Finally, you have to learn how to separate your intentions from your actions.  We measure ourselves by our intentions while everyone else measures us by our actions.  Nobody really cares what you’re going to do tomorrow; they want to know what you are doing today.  As the late Nascar great, Dale Earnhardt used to say:

At the end of the day, that’s all there is… Action Over Apprehension.