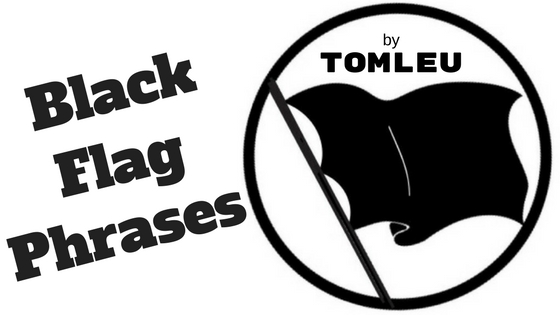 I call them “black flag” phrases (even worse than a “red flag”), and you should be very afraid of them… These statements are communication suicide for practitioners, though they usually don’t realize it at the time. These statements reveal much about the person saying them, and it ‘ain’t good. These phrases are screaming: “I’m scared; I’ve been hurt; I don’t want to let you in; I’m keeping my defenses sky high to avoid future pain from you, or anyone else.” While this is common stuff most of us have felt at one point or another, it doesn’t change the fact that saying any of the following is stifiling your credibility as an effective communicator:

Eradicate these statements from your lexicon. They’re weak; therefore they make you look weak. And you can’t afford that when others’ attention is today’s compensation… So how do you handle someone spewing this stuff?

First, understand that the exact opposite of what is being said is typically the truth. These phrases are psychological defense mechanisms to keep danger away; to keep others at bay, and to avoid having to experience any more pain.

Second, ask these folks some questions, lots of questions. These questions should be tailored to expose the folly of these over-generalized, blanket statements. Practitioners of “blag flag” phrases won’t take your word for it. They need to be guided (by your skillful questioning) to believe they’ve arrived at their own conclusions about the ridiculousness of these statements. Then, and only then, will they begin to shift their behavior and counter these self-defeating declarations.