There’s a lot of talk out there. A lot of noise. A lot of non-sensical bullshit being spewed by pseudo-intellects (or worse) attempting to disguise their opinions as facts. If that’s you, knock that shit off.

Don’t confuse your strong feelings or personal certainty about some things as facts. Have the balls to admit that YOUR opinions (of course) aren’t everyone else’s facts. What’s worse is many-a-slanted diatribe are often offered up with little style, and full of equally little substance.

Having a compelling point-of-view, combined with quality writing AND speaking, is seemingly a lost art in our text/technology and self-centered/social media-driven world. You must have substantive reasons for people to pay attention to you other than just getting your attention in the first place. You must offer value. Value in the eye of the beholder. We all must.

So, have your opinions, state them often, but understand the difference between what you want to be true, what you wish to be true, with what IS truly fucking true. Not everyone will love you, and that’s actually a good thing. But instead of just being a tool for sport, offer up your valid and valuable idea-toolbox for others to pick and choose, and choose to use positively in their lives. 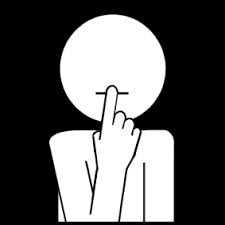 PEOPLE SPEWING ALL OF THEIR PERSONAL DRAMA (WITH or without) CAPS LOCK ON ALL OVER FACEBOOK AND OTHER ASSORTED SOCIAL MEDIA SITES… (complete with reckless overuse of the various keypad killers such as !!!!!!!!!!!! and &&**@@##, etc).

1) Demonstrate some RESTRAINT for fuck’s sake by riding roughshod over your impulsive, knee jerk reactions whenever your expectations (of the world and everyone in it) don’t get met. If that’s not possible within your twisted network of neurons, then…

2) Apply to get on one of those daytime “talk shows” that celebrate the skillful display of projectile chairs, frequent flying f-bombs, and idiotic and often incomprehensible rants, to air out all of your bullshit.

It’s a question we all get asked all of the time. And the typical, short response most throw out is:

Here’s what “fine” really means most often, and is best represented by the following acronym you may have already heard of before. … presented here with my “colorful” commentary of course:

“I’ve got a lot of shit going on in my life right now that I don’t feel in control of, and all this shit is stressing-me-the-fuck-out.”

“People, situations, and circumstances outside of my control are threatening my self-esteem to such a high-degree that fear has consumed me, and I’m not sure where I stand or if I’m good enough.”

“I’ve got “issues” and quirks that I do my best to keep hidden and under wraps because if you really knew how fucked I feel and behave sometimes, you’d likely run the other direction.”

“I’m often incapable of keeping my feelings in check, especially when my expectations aren’t being met and, shit’s not going my way. I then react and often overreact therefore causing me even more personal and professional pain leaving me feeling even more fucked up than before.”

Then the cycle starts again at F… sound even somewhat familiar?

So next time you or someone you know responds with the cliched “I’m fine” response… think of the F.I.N.E. acronym, and marinate in its truth. Rest assured that at least some of us know that you ‘aint fine bro; but you ARE quite normal.