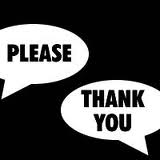 I’m convinced that for many, dare I say MOST people, simple common courtesy is an extinct, and outdated concept. “Do this, do that, I need this, I want that, and I want it all right NOW!” Rarely does a “please, thank you, I appreciate that, I know you’re busy but… or, if there’s anything you need from me, etc.” ever come out of people’s mouths or appear in their emails or texts. They’re all just orders poorly disguised as requests.

So many are in a hurry, inconsiderate, impatient, and too selfish and self-absorbed to consider the possiblity that a little common courtesy and etiquette can go a long, long way in achieving their needs they’re requesting FROM OTHERS. They’ve simply quit their etiquette…

Hey Assholes: You’re not the alpha and the omega, nor do you sit squarely in the center of the universe. You’re also not the only ones who are busy, have deadlines, and needs to be met. Take the extra 2-to-3 seconds necessary to say “please” and “thank you,” etc.

Demonstrate that you’re at least a smidge more socially skilled than a common caveman, and are at least somewhat aware of the power of properly-placed politeness if you hope to ever get me to respond to any request you ask and/or demand of me.

Because in the end, nice wins.

– Signed: Not an inconsiderate fuck.

Ah yes, the “loud-talker” in public… you know who I’m talking about… hopefully it’s not you.

This is an interesting breed of apparently oblivious (though not always), self-indulgent gems who make it their mission to ensure EVERYONE within earshot can hear every bullshit detail of their entire fucking conversation whether welcomed or not.

These self-centered fucks don’t give two shits about anyone else around them, nor about how their intrusive, light-belligerent behavior is negatively affecting others. You see, most people are too nice to say anything to these ass-hats because in a civilized society, most just don’t do that out of respect.

Most of us prefer to avoid making a scene, and being perceived as a dick… because most NORMAL people aren’t acting like impetuous attention-whores, and HAVE respect for others’ in public.

What I love most about these obnoxious, often obfuscating types, is their blaring self-delusion that people, (often even those in their immediate company), actually give two fucks about the…

I’m sorry, what was that? I couldn’t tune you out, nor ignore you even from the other side of the goddamn room because you’re talking so fucking LOUD… Here’s a tip: how about a nice warm glass of shut-the-hell-up, before I come over there an shut your pie hole up for you… word to the wise. 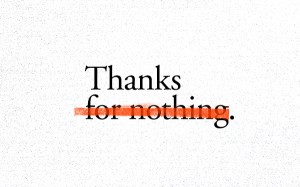 This entire post SHOULD be unnecessary, but unfortunately it’s not. To me, this all goes without saying… But I’m gonna say it anyway in the hopes that even just one person receives this message the way it’s intended. And that intention is simply to improve the way people communicate with each other, one interaction at a time. That’s the overarching goal of the talk shiFt series, and the manifesto of this site for that matter.

So here it is… the simple act of recognizing a job well done, and the subsequent and appropriate “thank you” response seems to be lost on many people in my experience.

Really, I mean really, how fucking hard is it to say “nice job” or “great work” or something to that effect to someone when it’s deserved?

And then, IF someone who actually has a fucking clue, makes the effort to extend such a compliment, how fucking hard is it to reply with the appropriate “thank you” response?

Apparently this is goddamn rocket science to some. It must be, because I see a lack of this basic Etiquette 101 running rampant repeatedly.

So what to do?

Push the fuck through it. Own your shortcomings, take the feedback, and be willing to grow as a human being and improve.

When you fail at common courtesy, you leave a lasting, and lame impression of you as a person. It matters little if this impression is accurate or not because  with human nature, reality is perception.

So do YOURSELF a favor… say nice things when nice things are necessary, and say “thank you” when complimented. It’s simple. Because remember: there’s no honor in being a dick.